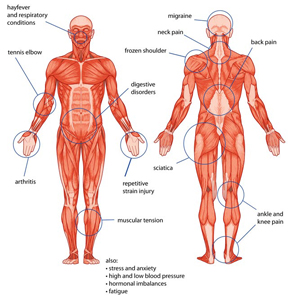 from early beginnings has become an internationally recognised and accredited therapy.

"Who would have known that such a simple and gentle form of treatment could be so effective." -Back pain sufferer, aged 24.

Meet us
With 10 years' experience, Jackie Matlock has been treating sufferers of sports injuries, back pain and other chronic and acute muscular conditions. Before setting up The Pain Relief Stop ...

What is Bowen?
Find out how an Australian man began using a new therapy on friends and family, and how it grew to be a world-renowned therapy.

Testimonials
The Pain Relief Stop has had many success stories recently. Read about some of our treatments

Accreditations
Jackie Matlock is accredited with membership to the following professional bodies:

A client who has found improvement to her muscular aches and pains comments:- "I really look forward to my 'maintenance' treatments - it is a very pleasant time of relaxation, and because it is a holistic therapy leaves me with a great sense of well being."

Young amateur footballer comments:"General massage seems to me to give an immediate relief from muscular tension but the effects never last. Whereas with The Bowen Technique even though the moves are so light and gentle and I noticed an immediate and lasting change in my ankle's flexibility. The changes didn't wear off over time unlike sports massage treatments". "One month on and I'm playing the best football since my injury. My agility has increased 50% thanks to Jackie!"

Athletic Woman suffering from fatigue commented :- "If it hadn't been for the beneficial un-sticking effects of Bowen I believe I'd still be stuck in a debilitating cycle of fatigue".

Volleyball player commented:- "I'd been walking around for a couple of weeks with a restriction around my sacroiliac joint, and just one treatment of Bowen released the annoying tension caused while playing my sport".

BACK PAIN & SCIATICA
Man, aged 24
P., an active sportsman with a physically demanding job involving continuous repetitive movements developed lower back and hip pain, making work impossible. Sciatica caused P's leg to give way numerous times with back spasm leaving him unable to straighten up. However, within a short period after his first Bowen treatment his sciatica improved. Gradually over the next few days the pain in his lower back began to ease. The second treatment enabled him to return to work. "I'm so happy that Bowen has worked so well for me. Who would have known that such a simple and gentle form of treatment could be so effective. To think back to how I was and how I am now—which is a testament to the remarkable effects of Bowen. I am now looking forward to my next treatment."

KNEE PAIN
Woman, aged 59 (3-4 treatments)
After having put up with hip and knee pain for a number of years J. decided she had to do something about her chronic condition. So rather than accept the usual 'wear n' tear' diagnosis and join the long queue for physio she decided to try Bowen. After only 3-4 treatments she had regained a significant amount of mobility and control enabling her to use steps at the back of her property which previously had made her wince with pain. Furthermore she was now able to walk steadily for 15-20 minutes without tiring which had been impossible before. "The inflammation and discomfort that kept me from sleeping also eased and with advise from my therapist I could keep this increasingly under control affording a reasonable night's sleep".

BACKACHE
Man, aged 50 (3 treatments)
Manual worker for over 30 years reports that "the benefits of Bowen are more long lasting than any other form of massage I have tried". He continues "having suffered from back pain on and off since my late teens, I'm amazed how much consistent improvement there has been in my back pain after having only three treatments". A. now only returns for occasional 'maintenance' appointments.

SCIATICA & PROLAPSED LUMBAR DISCS
Man, aged 46 (regular treatments)
Having suffered numerous bouts of incapacitating back pain, followed by prolonged episodes of sciatica only relieved by continual rest, C was diagnosed with two prolapsed lumbar discs at age 35. His Orthopaedic surgeon recommended surgery, and feeling very uncomfortable with that possibility he sought out other available treatments, including osteopathy, massage. Although there was some relief from pain he constantly found himself unable to straighten up making it exhausting for him to walk any distance. "Having received regular treatments I now find myself without any pain and only occasional stiffness which eases with movement. Bowen has truly improved my quality of life. I no longer take pain killers and am able to live my life to the full!"

ANKLE INJURY
Man, aged 21 (1 treatment)
Following an ankle injury while playing football, B. had sort appropriate medical attention and investigation. However healing was slow which prevented him from returning to his sport for some time. When he did take up football again he found his ankle stiff and inflexible. B. was delighted with his progress after just one treatment on his ankle! "I've played two matches since and noticed an increase in my ankle's flexibility which is still holding!" B. is looking forward to his next treatment not only to 'fine-tune' his ankle, but also to enjoy the de-stressing effects of Bowen.

FATIGUE
Woman, aged 38 (6 treatments)
C., a world class triathlon medallist had come to my clinic after being recommended Bowen by her sister. Having overcome ADHD, and then having been subject to a series of traumatic life stresses, she was now experiencing chest pains and severe fatigue which were constantly affecting both her work and social life. Not only did she find it very difficult to climb stairs but felt a constant need to sleep without being refreshed. After just one treatment she noticed an amazing difference, feeling able to cope with thinking about certain things she hadn't been able to for months. After another 2 sessions she found herself running up stairs two-at-a-time again. After four treatments she expressed her delight at "feeling almost back to normal". C. is now enjoying both her work and social life again!!